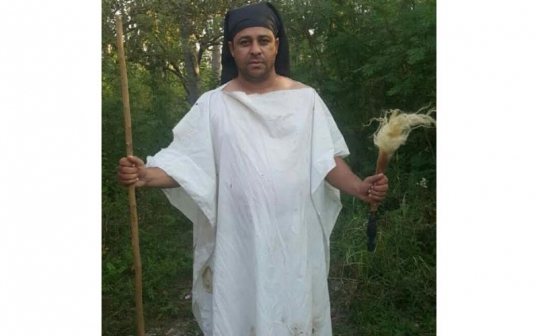 With just over a month to August elections, a flamboyant Tanzanian witchdoctor has camped at a five-star hotel in Nairobi with his sights set on politicians as clients. Unlike the image you might have of a poverty-stricken and poorly fed witchdoctor, Abdul is clean-shaven and clad in designer clothes.

For ‘Dr’ Sabil Abdul, elections are a matter of life and death for politicians who have no qualms using all manner of tricks to trounce their opponents.

Abdul has been in Kenya for a month now and was also here before the party primaries in April.

“Many people think I’m a political witchdoctor, which is partly true, but I’m also a healer,” says Abdul. “I’ve been visiting Kenya since the 2013 elections, mainly to ‘treat’ those aspiring for political seats and give them charms to win the hearts of voters,” he added.

Abdul says that the politicians “are the ones hosting me in this hotel but I’m looking for well-furnished apartment to stay in until the end of the elections” and that “those who won (in 2013) through my help invite me to their homes or hotels for treatment.”

For the ‘treatment’ a mheshimiwa has to bring a black or white goat and three metres of white and black clothes before the politician bathes and hands them back to Abdul to perform rituals and hope for the best.

“I sacrifice the goat to our gods to intervene and the clothes are used by clients to wipe themselves after bathing with special medicine. After that, I take them through more rituals in Mombasa and Lake Victoria in order for them to retain their seats or seek healing if its treatment they want,” he said.

He added that, “I also make special rings for the politicians. In fact, some preachers have them to pull numbers into their churches but they still attack us.”

He reveals that, “I charge Sh500,000 to treat those aspiring to be Members of County Assemblies, and between Sh2 to Sh5 million for those aspiring for other seats, including parliamentary, gubernatorial and presidential”.

However, Abdul explains that not all politicians pass the test to be treated. “First, I seek intervention to know if they have the right will to win and help deliver on their promises, or if they are seeking the seats for self-gratification. I treat or dismiss clients depending on the answer I get,” he explains.

But why are witchdoctors not rich, yet most claim to have charms that can bring their customers untold wealth?

Abdul claims that “poor witchdoctors are cons.” He then poses, “In any case, why treat yourself when you are not suffering from anything? In my case, I’m living a comfortable life.” He owns two Toyota Harriers with custom-made number plates in his name. He also owns houses and rice plantations in Tanzania.

“I also have two wives and four children who live comfortably. The secret to success in this job is to remain honest,” he says.

Confronting the Crucible of Choice