Paul is picking up here on what he had said already in Romans 6. So go back there with me and let’s remind ourselves of a few things. Take three verses to shed light on Romans 8:13. First, Romans 6:13: “Do not present your members [your bodies] to sin as instruments for unrighteousness, but present yourselves to God as those who have been brought from death to life, and your members to God as instruments for righteousness.” What then are “the deeds of the body” that we are to kill? They are those deeds that we are about to do (you kill them before they happen) when our bodies are “instruments or unrighteousness.”

Second, Romans 6:12: “Do not let sin reign in your mortal body so that you obey its lusts.” When the mortal body is taken captive by sin and made to obey lusts, then and there we see “deeds of the body” that should be put to death.

When Christ died, we died in him if we are united to him by faith. And we died with him so that we might demonstrate this death by putting to death the sinful deeds of the body. Because we already have the victory we can succeed in our violence against sin! He breaks the power of cancelled sin. We can only kill the sin that has already been killed when we were killed in Christ. This is Christianity, not moral self-improvement.

So the answer to the first question, “What are the deeds of the body in Romans 8:13?” is the deeds that we are about to do prompted by sin or lust or unrighteousness. Sin is deeper than deeds. The deeds are the instrument of the sin. And when that is what our bodies are about to do — go over to the side of the enemy — we put that action to death. In this war with ourselves, traitors are put to death.

2. What Is This Putting to Death?

The answer is that you suffocate the sinful deeds of the body. You cut off the lifeline, the blood flow. Deeds of the body come from somewhere. Jesus said, “The things that proceed out of the mouth come from the heart, and those defile the man. For out of the heart come evil thoughts, murders, adulteries, fornications, thefts, false witness, slanders. These are the things which defile the man; but to eat with unwashed hands does not defile the man” (Matthew 15:18–20). Sinful deeds have a lifeline that must be cut.

“You kill the bad fruit by severing the bad root.”

In other words, there is a condition of the heart that gives rise to the “deeds of the body.” It’s a heart issue. We must cut off the hands and gouge out the eyes, not literally — that would do no good — but with that kind of violent heart-work. You kill the bad fruit by severing the bad root.

What’s the bad root of “the deeds of the body”? You can see it in Romans 8:7: “The mind set on the flesh is hostile toward God; for it does not subject itself to the law of God, for it is not even able to do so.” The root of “the deeds of the body” that have to be killed is the flesh that is hostile to God and unwilling and unable to submit to him. 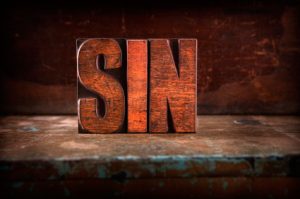 Verse 12: “If you live according to the flesh you will die.” Flesh is the great enemy here. And it’s an enemy because it is insubordinate and hostile to God. It doesn’t like God and does not want to be told by him what to do.

So to kill “the deeds of the body” that this enmity produces, you have to cut the lifeline. Pinch the air pipe. Stop the blood flow. Deeds must be killed before they happen by severing the root of hostility and insubordination that rejects God.

Let’s get at answer by following three steps, each with a different text.

Step One: Set Your Mind on the Things of the Spirit

So the first step in the answer is this: putting to death the deeds of the body by the Spirit involves “setting the mind on the things of the Spirit.” You don’t just look at the temptation and say no. You do that! But if you are going to put it to death by the Spirit, you have to do more: you direct your mind, your heart, your spiritual focus another way, namely to the “things of the Spirit.”

Step Two: Set Your Mind on the Words of God and the Realities They Stand For

What are “the things of the Spirit”? If we are going to rivet our minds and hearts on them in the hour of temptation so as to kill sin, what are we looking at? Here the key text is 1 Corinthians 2:13–14 where Paul talks about his own teaching as God-inspired words. This is the only other place in the New Testament where the very phrase “things of the Spirit” is used. He speaks of his revelations like this:

15 Richest Pastors In The US, No1 Shock