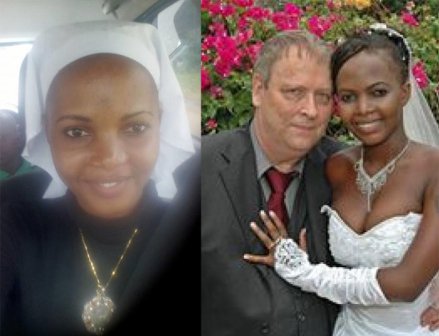 Eva Karwitha, whose publicised on-off relationship with her German lover hit the headlines sometime last year, posted a picture of herself donning a black robe, white scarf and jewellery, just like a nun.

She stoked a fresh uproar when she posted this photo with the message: “Sister Eva of Holly (sic) Family Basilica.”

The June 20 post attracted comments from readers who wanted to know why she was clad like that. When The Nairobian contacted her, she was not able to state her faith.

The church has denied knowing her,, adding that she could be covering up something sinister.

“We don’t have sisters working for Holy Family Basilica. Only priests work here. Besides, sisters stay in convents and work at specific offices or secretariats. It is shocking and wrong to wear a nun’s uniform when you are not. We ought to be careful because her real intentions are not known.  For sure, I know all nuns who work with us and she is not one of them,” James Kimuthu, the communications officer at Cardinal Otunga Plaza, told The Nairobian.

Nuns at the nearby Cardinal Otunga Annex also denied knowing Eva, saying posing for photos in gear resembling theirs was a bad joke.

Eva and her German lover, Pleschke Hienz George, hit local and international media headlines last year when details of their relationship were reported on social media.

George, 65, caused an uproar on social media when he publicly dumped Eva over allegations that she stole his car and Sh1 million. He announced his separation from Eva in late 2015 after accusing her of theft in a lengthy online post:

“From now on, I take no liability for all her financial or other transactions. I wish her all the best for the future. But please, do not come back,” the message read in part.

The couple however got back together days later with George uploading her photo with the caption: “Nakupenda Eva Karwitha. She is the one and only one forever in my heart. Back home again, my African queen.”

In an earlier interview with a local television station, George claimed that he met Eva in 2007 in Mombasa and they tied the knot three years later.

God Wrote Every Chapter in Your Story

God Isn’t Fair… But You Should Still Trust Him