Hallelujah
Home General The Touching Letter The Young Man Killed In Jaguars Car Accident Had...
Facebook
Twitter
Google+
Pinterest
WhatsApp
”Lord I beg you to help me get KSh 200,000 to build a house and buy a motorbike . Also make me remember to give you tithe and offering from this amount,” the handwritten letter reads in part. Check out the letter from Mugo below. Letter to God In the letter which TUKO.co.ke has seen, Mugo asked God to provide him with KSh 200,000 so that he could build a house and buy a motorbike. 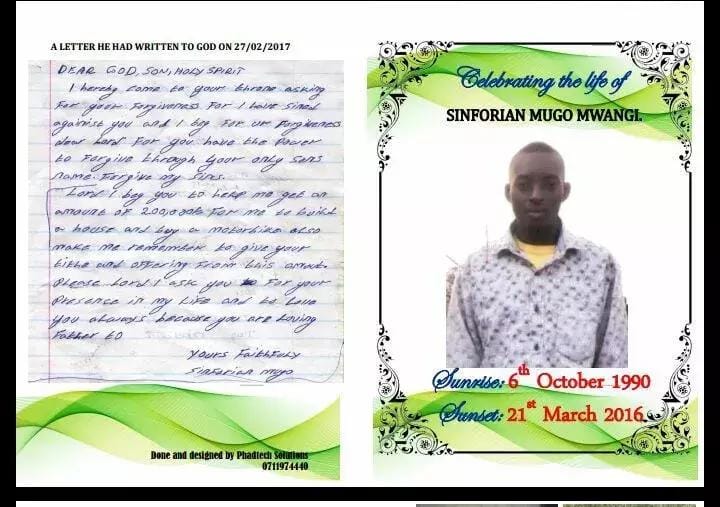 During the Sunday, March 26, accident which TUKO.co.ke reported, Jaguarcame out to claim that he was behind the wheel during the incident that left two men dead. A witness, however, identified the driver as female who then switched positions with a man immediately after the accident that took place along Sagana-Makutano highway. Following the different accounts of the fatal accident, the Director of Public Prosecutions Keriako Tobiko through his deputy has now written to the Directorate of Criminal Investigations’ boss asking him to investigate the accident.

Our Greatest Fear Was How Our Girls Will Handle The Transition, Dj Krowbars Wife...

Gospel Kids Who Can Afford To Pay Their School Fees