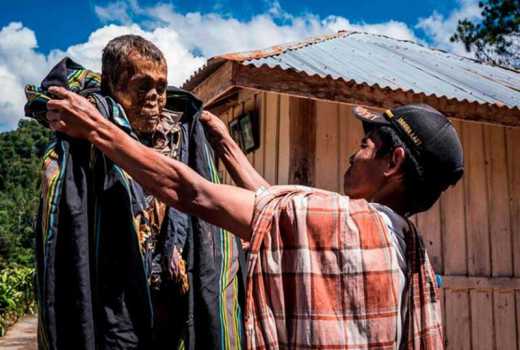 Shocking pictures reveal the ‘village of the dead’ where families dig up their deceased relatives to clean their bones and dress them in clothes.

The bodies remain in family homes for decades until the family throw a huge party in their honour. 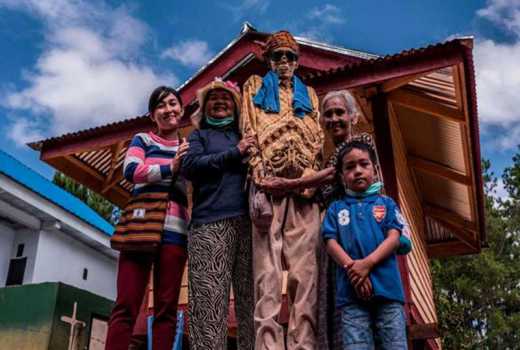 Loved ones are even dressed up in their new clothes and given cigarettes to smoke.

Villagers treat the corpses as “sick” until they finally find peace after funeral rites known as “Rambu Solo”.
<--nextpage-->
One photo shows a man clutching the corpse of his dead toddler.

The strange custom was pictured in South Sulawesi, Indonesia, where even buried relatives are taken out of their coffins for new outfits and a bone polish.

The death ritual of the Torojan people doesn’t believe someone has passed away until their Rambu Solo – even if they’ve been clinically dead for years.

So they’re treated like a member of the family until then – being laid in bed at night.

They’re also given some food and drink and are even included in family conversations.

Because the funeral ritual is so expensive, involving the sacrifice of a buffalo or cow, it can take many years for a family to save up.

Photographer Claudio Sieber, who spent three weeks with the Torajans, said: “The Torajans seem to have found a way to maintain their exclusive death cult surpassing some nine centuries, despite the increasing influence of world religions and the dashing modernization.
<--nextpage-->
“For the Torajans, keeping their deceased at home for a good, extraordinary ceremonial parties and even exhumation is a greater way to honour their beloved ones. Ma’Nene, the care of ancestors, is all about remembering those who have passed away.

“During the event the Torajan families clean the corpses of their loved ones, and in some areas they even change their outfit and make fun with them.”