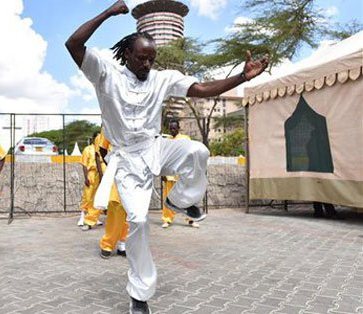 Three lucky Kenyans yesterday won a fully paid trip to China during the Kung Fu festival that was held at the KICC Comesa ground yesterday.

The three lucky winners will undergo training sessions at the Beijing International Arts School in China. The showcased their Kung Fu moves in front of a select panel of Chinese Kung Fu masters.

The Kung Fu festival was the first to be held in Nairobi.

The Kung Fu masters also exhibited their moves in front of the animated crowd.

The show, which was also a free family event saw other musical performances by leading East Africa star Jose Chameleone.

How Beautiful Daughter Of Anglican Bishop And Murkomen Fell In love, The Mischievous Things...