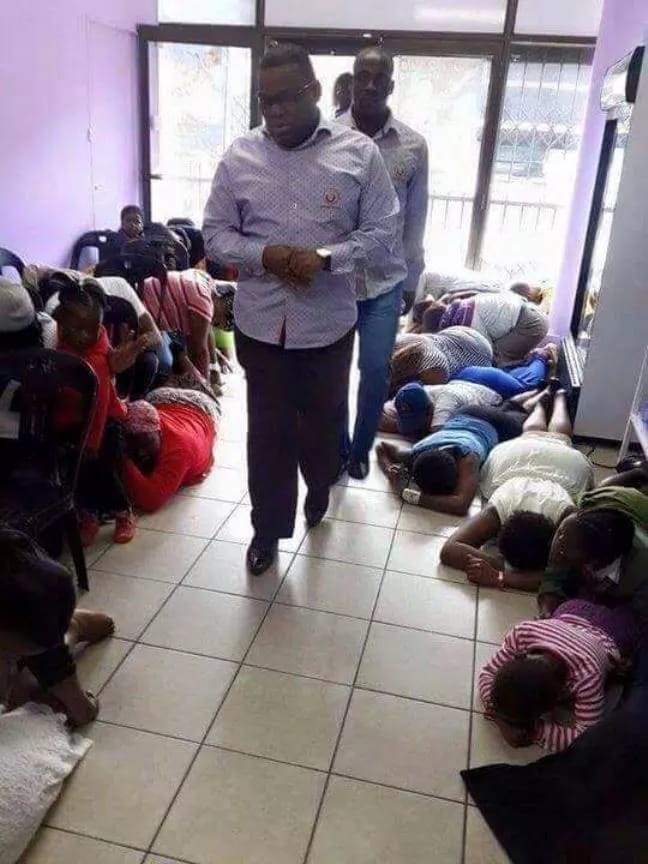 Seems like more and more preachers are beginning to court controversies these days, rather than focus on the real teachings of the bible.

According to a picture shared on Facebook, a pastor walked into his church and members of his congregation were made to lie down (some took a bow) in acknowledgement of his presence.

The yet-to-be-identified pastor, was seen walking in with his ‘support team’ while his members paid reverence to him.

At the entrance of a pastor, the whole congregation are expected to lie on the floor. And in other churches, they are expected to stand on their feet. This is NOT the Christianity that Christ and His apostles had taught in the Bible but it’s Christianity invented by man.

“And as Peter was coming in, Cornelius met him, and fell down at his feet, and worshipped him. But Peter took him up, saying, Stand up; I myself also am a man” Acts 10:25‭-‬26.

“And I John saw these things, and heard them. And when I had heard and seen, I fell down to worship before the feet of the angel which shewed me these things. Then saith he unto me, See thou do it not: for I am thy fellow servant, and of thy brethren the prophets, and of them which keep the sayings of this book: worship God” Revelation 22:8‭-‬9.

Today, Christians have lost their sense of reasonings and have become so stupid to practice nonsense in order to please their pastors. What a shame!“

Woman Gets Married To Church After Having A Troubled Marriage

One Thing We Should Carry With Us to the New Year