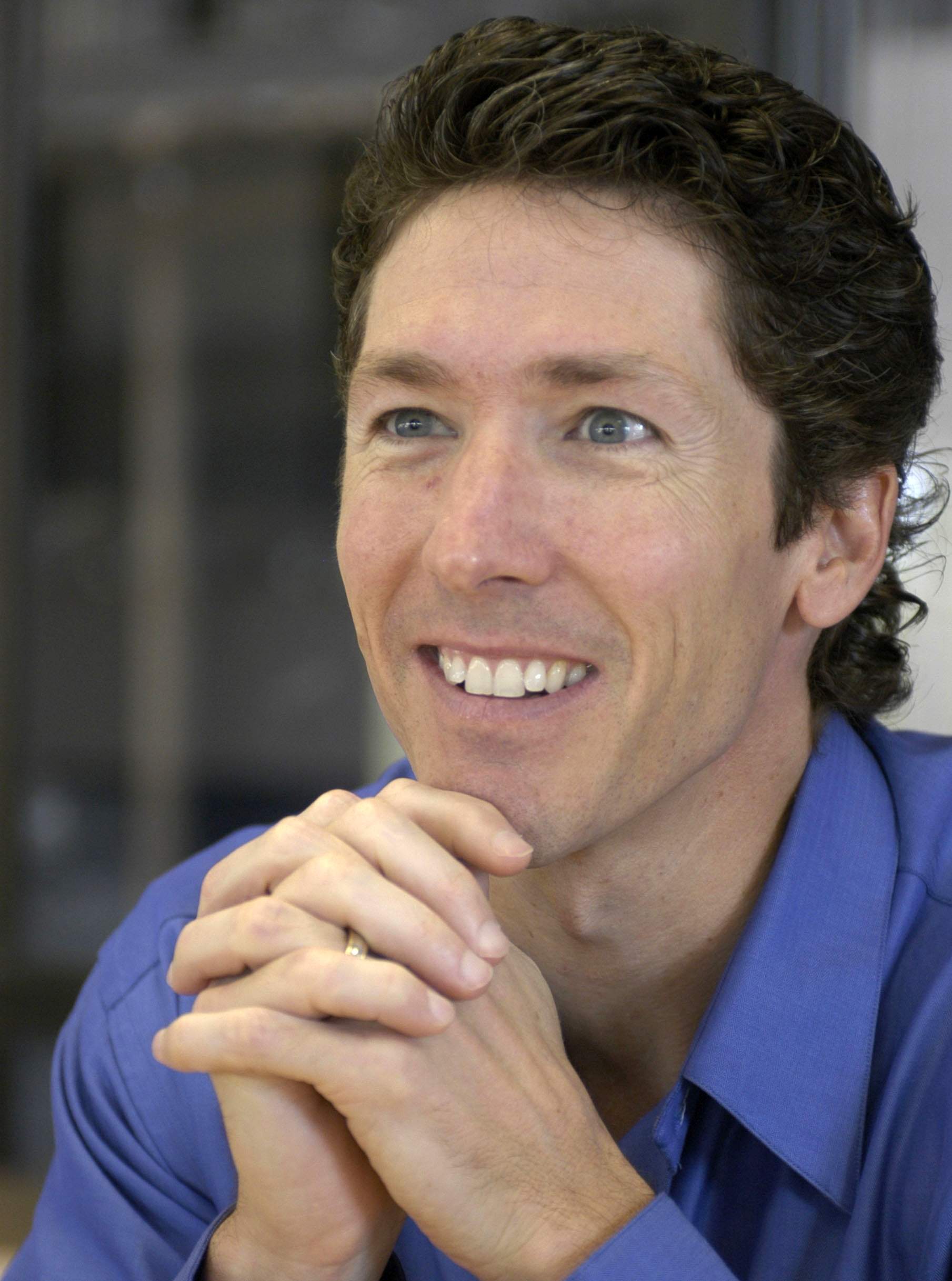 By October of 2005, Joel Osteen’s Your Best Life Now: 7 Steps to Living at Your Full Potential had spent a full year on the New York Times list of bestselling hardcover advice books. Osteen heads what has been called the largest church congregation in the United States, the 30,000-member Lakewood Church of Houston, Texas. Osteen’s book is a distillation of his message from the pulpit, encouraging personal fulfillment through prayer and positive thinking. “With a blend of Christian morality and motivational cheerleading—and a blinding grin that has earned him the nickname Smiling Preacher— he’s forged a connection with a racially mixed, economically diverse following that unites CEOs and former addicts,” wrote People ‘s Susan Schindehette of Osteen’s appeal.

Osteen’s father, John, founded Lakewood Church back in 1959. The son of a Texas cotton farmer, John Osteen was a Southern Baptist minister before his faith took on a more charismatic turn in the late 1950s. He founded his own nondenominational church in a predominantly African-American neighborhood in Houston, and over the next four decades shepherded it into a dynamic, thriving congregation. The senior Osteen’s feel-good message, in which he exhorted churchgoers to have deep faith, and the blessings of the material world—good health, prosperity, and a solid family unit—would be theirs, caught on with Houstonians, and the church had grown to 5,000 members by 1979.

Osteen, born in 1963, was one of six children in their own family unit, which included one son from his father’s first marriage. He did not seem to initially inherit his father ‘s zeal and ease before crowds, for at his suburban Houston high school Osteen was shy and did not even attend his senior prom, though he excelled in sports. He went on to Oral Roberts University in Oklahoma, the largest Christian charismatic university in the world, but returned home after a year and suggested to his parents that he set up a television ministry for Lakewood Church. His father, however, was wary of the growing number of televangelists on the air at the time—ministers like Jim Bakker and Jimmy Swaggart, who used the electronic medium to solicit donations—and okayed the new venture only with the stipulation that Lakewood would never use its media pulpit to appeal for contributions.

For the next 15 years Osteen directed and produced the weekly Sunday service at Lakewood, which aired on a local Houston station, and later on the Family Channel, a cable network. He traveled with his father, even as far as India, to assist in the church’s missionary and outreach work, but scrupulously avoided a more active role. Occasionally, his father asked if he would like to deliver a sermon or speak during the church services—his mother Dodie and sister Lisa regularly did so—but he declined the invitation. But by early 1999, John Osteen’s health was deteriorating, and he felt increasingly taxed by heart and kidney problems one week. He asked his son to deliver the Sunday sermon, and Osteen once again refused—but then called back a few minutes later and told his father that he would do it.

Nervous and wearing a pair of his father’s shoes for emotional support, Osteen spoke that day before a crowd of 6,000, and the churchgoers responded well to his easygoing, affable style. Eleven days later, his father died of a heart attack, and Osteen was named to succeed him as pastor of the church. Lakewood’s attendance numbers began to grow almost immediately, thanks to Osteen’s blend of his father’s self-improvement-through-faith message, tempered with anecdotes from his life and times. In one early sermon, he discussed the hardships of modern marriage, and urged wives to consider lingerie as a way to strengthen their unions. Lakewood also began using more music in the services, and congregants were encouraged to let the spirit move them if they so chose when the country-gospel ensemble began playing.

Among traditional Protestant faiths, Osteen’s sermons were more inspirational—urging churchgoers to have faith that a higher power was in charge— than hectoring them about their possible shortcomings as Christians. He rarely discussed biblical scripture at any length, as standard sermons did. “We need doctrine, but I think the average person is not looking for doctrine,” Osteen explained in an interview with William Martin for Texas Monthly. “They are looking to ask, ‘ How do I let go of the past?’ ‘How do I have a better marriage?'”

Over the next five years, Osteen’s church swelled exponentially in number, outgrowing the large facility his father had built back in 1987. Perhaps even more impressive was the diversity of its congregation, which drew from various socio-economic backgrounds and races. Some of the popularity stemmed from the connection it offered—though it was large in number, the church ran various smaller groups and ministries in which its members could interact. There were ministries for teens, singles, and seniors, and support groups for various problems, including marital infidelity. It even offered free financial counseling services.

Osteen’s Sunday sermons were broadcast weekly on religious channels such as TBN, and showed up on cable channels that included ABC Family, USA, and BET. Osteen also had his own show, Joel Osteen, and began touring U.S. cities in one-night speaking engagements that drew fans to arenas. Asked about why his message and ideas seemed to resonate with his Houston congregation and ardent cross-country television audience, he theorized that his pastoral mission struck a chord with the average American. “There’s so much negativity pulling people down,” he told Carolyn Kleiner Butler in U.S. News & World Report, “that I think they respond when you say, ‘You know what: God’s not mad at you; He’s on your side, He’s got a good plan for your life, and when we obey what He wants us to do, we’re going to prosper.'”

Osteen’s appealing message led to the book, Your Best Life Now: 7 Steps to Living at Your Full Potential, which was published by Warner Faith—a subsidiary of the immense Time-Warner media empire—in October of 2004. It rapidly advanced up the New York Times best-seller list in November, and earned the impressive distinction of becoming the fastest-selling nonfiction book in publishing history. At one point, it even outpaced sales of his nearest competitor, Rick Warren, a pastor from Lake Forest, California, whose 2002 book, The Purpose-Driven Life, also racked up extraordinary sales figures. Osteen’s book, like Warren’s, was usually slotted into the self-help section of bookstores. Butler, of U.S. News & World Report, asked Osteen if he objected to being put alongside pop-psychology tomes rather than among more contemplative religious writings. “I wouldn’t have necessarily put it in that category by choice,” he responded, “but it doesn’t bother me because it does, it’s there to help you live a better life, to live by God’s principles, so it doesn’t bother me at all.”

In 2005, Osteen’s Lakewood Church moved into a new local meeting-house, the Compaq Center, which was the former home arena of the Houston Rockets. His organization negotiated a rather tough sale with municipal authorities, beating out an affluent real-estate developer determined to build on the site, and then went on to spend more than $90 million to renovate it into a 16,000-seat church.

Those funds came from the well-managed operation that Osteen oversees, in which family members and trusted cohorts play leading roles. Even Osteen’s brother, a surgeon, gave up his practice and works for Lakewood Church. Their mother, Dodie, still speaks at every Sunday service, and Osteen is nearly always seen with his wife, Victoria, by his side, a statuesque blond with similarly telegenic good looks. The two married in 1987, two years after Osteen met her when he stopped by the jewelry store her father owned. Their two young children, Alexandra and Jonathan, also take an active role in Sunday services.

Lakewood Church belongs to a growing category dubbed the megachurch—Protestant, usually evangelical or charismatic religious groups with 2,000-plus members. At 30,000 members, Osteen’s is the largest of this new breed of the American religious experience, and likely the most lucrative, too. Its annual revenues are estimated at $60 million, but concrete numbers are not readily disclosed, since it is technically a family run church. Under U.S. law, churches are tax-exempt, but still have to submit some data to the Internal Revenue Service (IRS). Family-run churches like Lakewood, however, are excused from such scrutiny.

Osteen lives in the posh Tanglewood section of Houston, a prosperous outcome that owes much to his former second career before he took over his father’s church, in which he bought and renovated rental properties. At Lakewood, much of his work week is spent writing and practicing his Sunday sermon, while other Lakewood ministers handle the bulk of the other pastoral duties—weddings, funerals, and other engagements. He is sometimes termed the likely successor to the Reverend Billy Graham, whose successful ministry—one of the first to use television—made him a figure of immense renown and respect in the United States and abroad.

Osteen is hesitant to involve himself in politics, and avoids taking a stance on issues like gay marriage and reproductive rights. He did run into trouble after a June of 2005 appearance on CNN’s Larry King Live to promote Your Best Life Now. King asked Osteen about his thoughts on other faiths that do not consider Christ as the savior, particularly Judaism and Islam, and did he think that those believers would reach heaven. Osteen responded considerately, noting that he had traveled to India with his father, and met many different people who impressed him with their faith. As Martin related in the Texas Monthly article, that “humane, large-spirited response—quite similar to comments Billy Graham has made on occasion—apparently brought a flood of critical calls, letters, and e-mails to the Lakewood office, prompting Joel to issue an abject apology on his Web site, asserting that he believes ‘Jesus Christ is the only way to heaven.'”

Despite his popularity, Osteen is sometimes criticized by mainstream Protestant scholars for not condemning materialism more ardently, and perhaps even encouraging it. “Osteen is an easy theological target,” asserted Jason Byassee in Christian Century. “He merits attention mostly as an unreflective exemplar of temptations all ministers face—to translate the charged political and theological language of the scriptures into a vague religiosity, or into more easily digestible categories of self-help and self-improvement.” Byassee discussed Osteen’s place in a nondenominational group of American churches sometimes called “Word of Faith,” but harsher critics call it Christianity Lite. Osteen defended his sermons and writings against the charges of an over-emphasis on the material world, telling Martin in the Texas Monthly interview, “I never knew it was such a bad thing to be a Word of Faith preacher, but I never preach that whatever you say, you can get—’I want five Cadillacs.’ ‘I’m going to be the president of this company.’ I never believed that kind of stuff.”

Even Byassee conceded that Osteen’s message was not that drastically at odds with the underpinning philosophies of Western civilization itself. “In some ways Osteen echoes an ancient and venerable Christian tradition that borrows from Aristotle,” the Christian Century writer noted, “in calling itself ‘eudaemonistic.’ That is, Christianity offers the happiest life possible.” It was an idea that Osteen regularly expounded in his Sunday sermons, and in his increasingly frequent media interviews. “Prosperity is not just money,” he reminded Martin in the Texas Monthly article. “It’s a healthy relationship with your wife, with your kids; it’s a healthy body. We need to get away from the dollar sign on prosperity.”

How The Christmas Story Is Probably Different To What You Think

Prophecy: ‘We Are in a Season of Supernatural Restoration’

How You Can Bring the Spark Back to Your Marriage