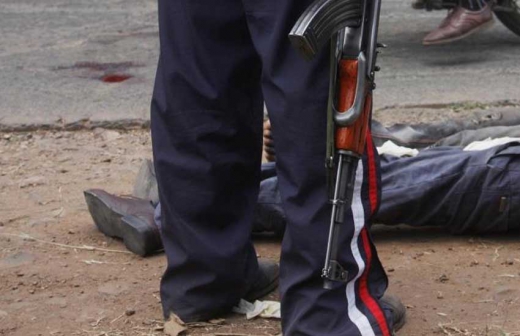 A man has been arrested after he walked into a church in Ngong, and confessed to a pastor that he was among those who killed two police officers in Kiambu last week.

The suspect is being interrogated by police in Kiambu to establish if his claims are true.

He went to the church on Tuesday and told a pastor he and his three accomplices shot dead constables Martin Irungu and Paul Maina of Kibichoi Police Post and stole a gun from one of them.

The weapon is yet to be recovered.

According to Ngong police boss George Seda, the pastor asked police to come and talk to the suspect and hear if what he was saying was true.

“The suspect has confessed many issues and he claims he was among those who killed the two officers in Kibichoi. He claims he has been on the run over fears he would be killed,” said Seda.

Seda said the suspect had told police he used to operate in Kayole, but shifted to Juja and later to Kiserian.

On Sunday, he heard his accomplices had been killed in Juja and when he went back to his house in Kayole, he found it had been ransacked by police.

Seda said the suspect told them he decided to surrender because he feared he would be killed anytime just like his accomplices, either by police or mobs.

On Sunday, two suspects, including the husband of a woman described as Nairobi’s “prettiest thug” who was shot dead in May, were killed in Juja and a pistol found on them.

George Mwaniki alias Mwanii was shot dead after being on the run for months. His wife Claire Njoki was killed by police in May in Kayole after a robbery.

In the Kiambu incident, the gunmen pumped four bullets into each of the officers before jumping into waiting motorcycles and riding off. The attackers snatched an AK-47 rifle from one of the officers.

Some of the officers’ colleagues said the manner in which they were killed was suspect, given the number of bullets used on each of them.

Ordinarily, thieves out to rob officers of their weapons do not use many bullets, another officer said.

More than 50 officers have been killed in line of duty since May in the country, mostly along the Kenya-Somalia border in terror-related attacks.

According to police sources, violent crime has spiked in the city and its environs after the elections.

“I’m Not Perfect, I Fall To Sin Like Everybody But I’m Saved By Grace”,...

5 Things That Block You From Hearing God (And The Solutions)

3 Ways to Respond to God’s Answers to Prayer