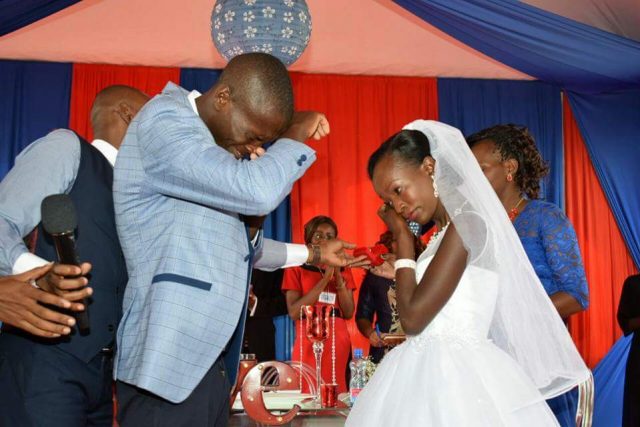 Wilson Mutura and his wife Ann Muhonja have been blessed with a bouncing baby boy.

The young couple shot to the spotlight early this year after their 100 bob wedding, which was held at the Community Christian Worship Church in Kasarani.

Their simplistic life and pure love for each other touched many.

Wilson and Anne had planned to tie the knot in December 2016 but unfortunately, they didn’t have money.

“UNFORTUNATELY WE COULD NOT RAISE MONEY FOR THE WEDDING. I AM EMPLOYED TO SELL APPLES IN A MKOKOTENI WHERE I’M PAID ON COMMISSION. IF I SELL APPLES WORTH SH1,000, I AM PAID SH100. HAVING NOT RAISED THE CASH, WE CANCELED THE WEDDING,” SAID WILSON.

After their humble 100 bob wedding went viral, they were thrown for a multi-million shilling wedding courtesy of local corporates. It cost a total of Sh 3.5million. The two later enjoyed an all-expense paid honeymoon in Diani.

Mbuvi Answers Your Question Why He Is Lonely This Valentines

These Are Three Rich, Powerful Churches In Kenya

‘Jesus Is My Lord And Saviour ‘ Wahu Confirms Rumours That She Is Now...

Nicah The Queen Is Up With A New Song ” Naringa”